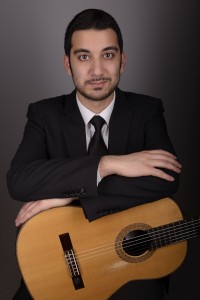 Born in 1992, Iranian Scottish guitarist Sasha Savaloni is currently pursuing a Doctoratal degree at the Royal Conservatoire of Scotland under the supervision of renowned performer and teacher Prof. Allan Neave.

As a soloist he has given concerts in Iran, Italy, Spain, England and throughout Scotland, performing recitals in venues such as the Kings Place (London), Sage Gateshead (Newcastle), City Halls (Glasgow), Stevenson Hall (Glasgow) and the LCM Venue (Leeds) as well as performances in significant festivals such as the Big Guitar Weekend, Les Garrigues Memorial Emili Pujol, Edinburgh Fringe Festival, Plug Festival and the Ullapool Guitar Festival.

As a soloist he has performed with orchestras such as the Royal Scottish National Orchestra and the European Union Youth Orchestra.
Keen on chamber music, he has worked with numerous musicians and ensembles, including collaborations with soprano Alison McNeill, flautist Lee Holland and the Red Note Ensemble. His close partnership with soprano Alison McNeill has resulted in recording and interview for BBC Radio in addition to concerts in Spain and throughout Scotland. Sasha and Alison are the 2015-2017 Enterprise Music Scotland Residency Project artists.